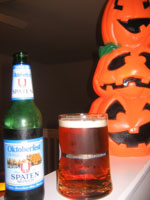 The best thing about October? Oktoberfest! Beer, sausage, lederhosen… does it get any better? I had a wonderful time at the Oktoberfest celebration at Gene’s Haufbrau on Sunday… some of the best brats I’ve ever had. Despite the goodness of the brats, I got annihilated in a brat eating contest. I barely finished my first by the time the winner finished his third. I’ll do better next year, now that I know what to expect. Got to have a full beer in hand to cool those puppies down! My mouth is still raw from the burning brats. Nicole fared better in competition, finishing as runner up in the beer drinking contest, but did not fare so well in the post-party celebration. She was hurtin after those beers. I’d show some pictures, but that could possibly cause damage to my marriage. :)

Anyway, I hope all this provides the backdrop for October’s Beer of the Month, Spaten Oktoberfest. This beer is perhaps the crown jewel of the style that embodies the season. The aroma is not too striking, but the flavor, and most of all, the body give this beer its distinctive edge. While certainly a lager, the flavor of the beer seems to transcend regular lagers. In other words, I actually like it. I could strap on my suspenders and pound a few pints of this stuff.

However, the characteristic that I find puts this beer over the top is its body. It has to be the creamiest lager I have ever tasted. It literally melts in your mouth. It feels like a creamy brown ale, but drinks like a crisp light lager. A potent combination, best enjoyed with an umpa band and a designated driver.

I like beer.
View all posts by Brian →
This entry was posted in Beer of the Month. Bookmark the permalink.