With St. Patrick’s Day right around the corner, I wanted to go with an Irish beer for my March selection. Well, trouble is, at least around these parts, my only choices are generally Guinness and two Guinness subsidiaries, Harp and Smithwicks. There are a couple others I’ve found, like Beamish, but I’m saving that one for something special later this month.

So, with my choices at hand, I had to improvise. I decided to feature Rogue Kells Irish Lager. I know it might be considered poor form to pick an American beer for an Irish-style review, but until I start making a lot of money off being a “beer guy,” I can only work with what I’ve got. 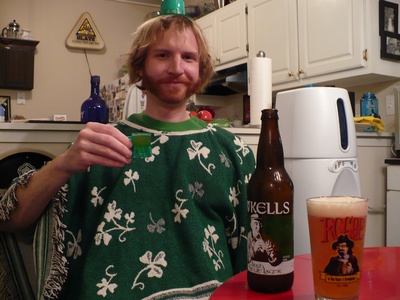 I’m going to take a quick step back in time to give you a little background on my beer tastes. When I first started branching out from American Standard lager (Bud, Miller, etc.), my favorite beers were English and Irish. I loved European style beer. Newcastle, Bass, Boddington’s, Warsteiner, Sam Smith’s, Harp… But now, I just don’t dig it as much. Call me a homer, but I prefer American beer most of the time.

There’s also a little matter with lagers. I don’t generally like them. I can tolerate them, and there is a time and a place for them, but I’ll take an ale any day of the week. So, it makes it all the more remarkable what I’m about to say. I actually like the Kells Irish Lager.

It pours a hazy golden color with a thick white head. The aroma is understated, with very subtle hops detectable. The flavor is mild, more on the malt side. Again, you can’t detect much, if any hop flavor. It has a crisp beginning and a slightly sweet finish. The aftertaste is brings in a slight fruit undertone. They call it apple on the label.

My favorite aspect of this beer which separates it from other light lagers is the body and mouthfeel. It actually has some substance to it, unlike the American Standard counterparts. It’s a beer that I can drink and feel good about myself. The flavor is pretty mild, so that might be why I enjoy it, despite it being a lager.

This is definitely not a blow-your-sox off beer, that isn’t what it is meant to be. It’s a pleasant lager that’s good for drinking in a Irish bar for a few rounds with friends. If you want a solid Irish-style beer to drink, you can’t go wrong with the Kells, and you can still respect yourself in the morning.

I like beer.
View all posts by Brian →
This entry was posted in Beer of the Month. Bookmark the permalink.