the prodigal intern returns to The Coast

If you’re a long-time reader of this blog, or if you’ve known me personally for more than 15 minutes, you probably know that I’ve been homebrewing for about two and a half years, and I’ve had thoughts of going pro at some point in my life. I never really pursued it seriously, most likely because I figured that, like many hobbies, if you did it day in and day out, it would lose its luster and become “work” like anything else. 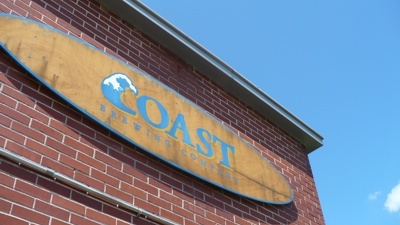 I finally decided to do something about it and test this theory. About two months ago, I contacted Jaime at Coast Brewing Company and asked if they could use a hand. I got to know David (the brewmaster) and Jaime (his wife and co-owner) about two years ago when they first opened the brewery in Charleston.

We were at their grand opening celebration in October 2007. (To show you how much of a noob I was at the time, if you read that post, you might notice in my descriptions that I got the Kolsch and Hop Art mixed up. Doh! Humble beginnings…)

How In the World Did You Get This Job?

I approached Coast with my suggestion because I felt we had a good relationship, they know I love beer, I think they are cool people, they are still small enough to where even an inexperienced hand could be very helpful, and most importantly, I really respect and enjoy their beer. David is one of the most talented and imaginative brewers that I’ve come across, and to have the chance to learn under him would be an unbelievable opportunity. Even if it was just for a short time.

So, for a reason which may forever remain a mystery, Jaime and David agreed to let me drive 200 miles to spend a couple days a week with them. Maybe they figured if I was insane enough to commute three hours to come to work, I was serious about what I was doing. Or maybe it was my red beard. (And a special thanks to Phil, Eric and Lindy for letting me crash at their respective houses. I couldn’t do this without your help!)

Monday morning I got up, lifted weights at Phil’s house and felt really good about the day. After having my traditional coffee and cereal for breakfast, I began my morning commute. After working at home for over a year now, I often forget about the frustrations of traffic. Dorchester Road in North Charleston was insane. It was a solid 2-lane artery of cars for as far as the eye could see. It took me roughly 30 minutes to travel 6.5 miles. I don’t know how people do that every day.

I got to the brewery around 9, ready to do whatever they had for me. Mondays are shipping days at Coast, so my first task was to help clean kegs and get them ready to be filled. The distributor usually arrives around noon to drop off empty kegs and to pick up their order for the week.

I first learned how to take apart and reassemble the opening of a keg. It’s often a good idea to open up and physically take a look inside a keg to make sure there is no dried or caked on beer stains. Often, these kegs are left outside, and especially in the summer, if there is anything left in the keg it can bake to the inside. 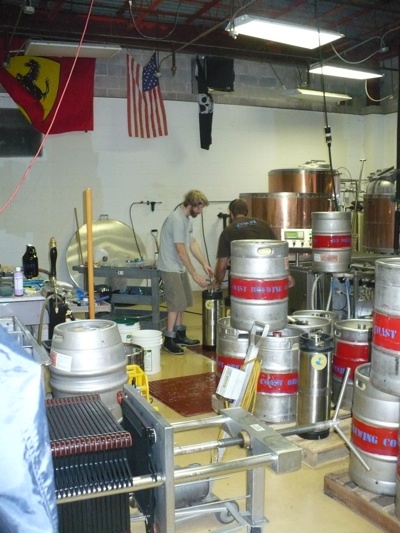 If a keg is pretty dirty, you can take a hose and a carboy brush and try to remove as much of the stains as possible before hooking it up to the keg washer. The washer puts the keg through a couple rinse cycles before a caustic acid wash to remove any residue or build up. Once that is complete, it is rinsed with a sanitizing solution, and CO2 is blown in to get everything out and fill the empty keg. At that point, they are ready to be filled with beer.

I also had the chance to fill a few kegs for the day’s shipment. I don’t know where those kegs were headed, but if you are having Coast Kolsch within the next week or two, there’s a chance I had a hand bringing it to you!

The distributor dropped off about twenty or thirty empty kegs, so after lunch I spent a couple hours cleaning those, getting a head start on next Monday’s shipment.

Around 3:00, after the kegs were finished, we set out to clean out a couple empty grundy tanks. These 7 barrel (a keg as we refer to it is a half-barrel) containers hold finished beer to be kegged or bottled at a later time. They are also on wheels, so they can be filled and moved into the large walk-in fridge for storage. 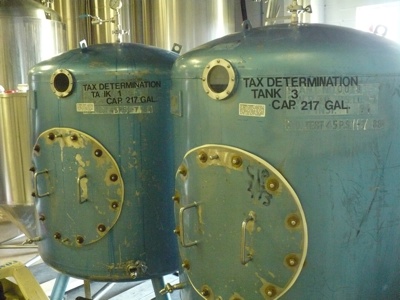 The cleaning process is pretty much the same for homebrewing as it is in a commercial brewery. You first use a base cleaner, such as Five Star PBW, to clean the inside of the tank. This is done by hooking up some large hoses to a couple of the orifices of the tank, pumping water inside and then circulating the water with the cleaning solution.

After cleaning with the base, the same process is used with an acid solution, such as Star San, to sanitize the tank. It’s always clean then sanitize with every piece of equipment that touches finished beer. It’s the same thing I do in my house, just with a lot bigger stuff.

Once we were done cleaning everything, it was time to unwind. The perks of the job are quite nice. Namely, that you’re in a brewery. It was a rigorous day, but not too tiring. I still had enough energy left by the end of the day for a little Rock Band with Red and Lindy. Rock on, Mississippi Swamp Gator!

Tuesday was more of a learning day for me than Monday. Our goal for today was to filter 15 barrels of Kolsch. My first task was to set up the filtration system. It consists of about 20 filter pads sandwiched in between plastic plates. These plates have holes in two corners where the beer enters and exits. The rest of the plates have ridges in which the beer flows.

As the beer passes through the ridges, yeast and other particles that are in the beer as it flows in get caught by the filter pads. So as to not filter out any additional flavors and color, Coast uses a fairly open filter pad since they are primarily targeting yeast.

Once the filtration system was cleaned and sanitized, it took about four hours to run all the beer through and into the two grundy tanks that we cleaned out the day before. I was able to sample the beer pre-filter and post-filter, and while the beer coming out was certainly clear as a bell, the beer going in (which was slightly cloudy from the yeast still suspended) was noticeably distinct and in my opinion, a little tastier. It was slightly more fruity and bitter than the filtered beer.

As I learned from David, filtering is one of the riskiest processes in commercial brewing. Any time you move beer or expose it to the elements, you run the risk of contamination. Even though the filtration system is fairly closed and we sanitized everything thoroughly, there is the risk of the filter getting stuck if too much sediment accumulates. Luckily, it went smooth as silk for us, but a stuck filter is a serious pain and is difficult to fix.

Why filter, then? Well, in this case, it’s all about appearances, unfortunately. A kolsch style of beer is expected to be clear and golden, much like the standard lager that dominates the marketplace. In order for the kolsch to sell, it has to be clear. It’s one of the unfortunate consequences of being a commercial brewery. If I were doing this in my house, it wouldn’t matter, but when you have sales to make, sometimes you have to do things that are not ideal.

The filtration process took about four hours, and in the downtime we cleaned out the hot liquor tank. That process involved circulating a hot acid solution in the tank for about 30 minutes to remove any mineral deposits that can accumulate from the water supply.

Once we finished filtration and cleaned all that up, we cleaned out the tank that the unfiltered beer was in. I nearly killed myself sticking my head inside the tank as it was filled with CO2 from the cleaning process. Not a good idea, since we don’t breathe CO2 very well. Kind of like sticking your head under water. Other than that, I’m no worse for wear!

At Coast, for instance, they only brew one day a week for the most part. Occasionally they’ll brew twice in a week. The rest of the time is spent cleaning stuff, moving beer around, preparing shipments and doing general maintenance. It’s not glorious work, and that’s why a lot of beginning homebrewers don’t stick with it. Once they learn that brewing is a lot more work than just brewing, it becomes a lot less attractive. You have to love it, or you won’t put in the effort.

The biggest difference is obviously the size and complexity of the equipment. At home, I don’t have to worry about glycol cooling systems, CO2 regulators, industrial water pumps, or steam-heating 400 gallons of water. There are a lot of parts and pieces, and it takes a pretty mechanically inclined person to maintain, let alone understand, all those systems.

That’s when my head would start to spin. From my homebrewing experience, I have a pretty good handle on the beer part of it. However, I have very little mechanical experience, so that’s where I have the most to learn.

I loved it. I had an absolute blast. David was a great teacher and I learned a ton. He always stayed patient when he had to explain things several times, and he kept his sense of humor, like when I was about to disconnect the hose from the hot liquor tank from the wrong side of the valve.

What was also so cool about the experience was how the brewery is truly a “results-oriented work environment.” No one cares what you look like, what you talk like or what you do. It’s all about getting the job done. Does the beer get made and does it leave the brewery on-time and in good condition? It’s very refreshing, especially since we live in a world that judges by appearance and words, not as much by action.

You never know whether a hobby can become a job, or if something you enjoy will become a chore when you do it every day for an extended period of time. That being said, I could see myself in this environment and really enjoying it. Coming from 10 years of work behind a desk, it was exhilarating to be physically involved in my work, to have my hands on something tangible.

I’m not sure what’s going to happen for me from here, but all I know is that I’m looking forward to next week. I’ll be back down there Monday and Tuesday to report for duty. I’m hoping Tuesday will be a brew day. Flippin’ sweet!

I like beer.
View all posts by Brian →
This entry was posted in Breweries. Bookmark the permalink.

5 Responses to the prodigal intern returns to The Coast