This brew was Nicole’s first time taking the reigns as lead brewer. It was very hard or me to sit back during the brewing process, but I managed to play nice as assistant brewer and consultant.

The Nicolie-Belgique was inspired by Stone’s Cali-Belgique IPA, an American-hopped Belgian-style IPA. She started out with a strong pale grain bill, and hopped the hell out of it with Amarillo and Cascade, and fermented with a Belgian Strong Ale yeast.

The result was an 8% golden pale ale with a sweet malt backbone balanced by a tremendous amount of citrus hop flavor and aroma. She went easy on the bittering hops, so it doesn’t destroy your mouth with bitterness on the finish. Despite all the malt and hops, the finish is nicely dry. 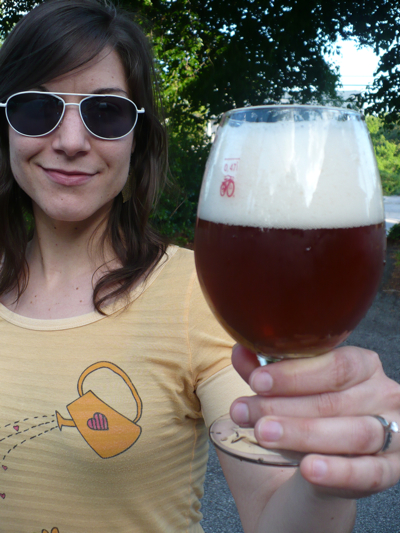 All-in-all, it’s an exceptionally well-balanced, big beer with a lot of flavor and wonderful aroma. I knew from the moment I first quaffed the magnificent aroma that it would win the Brewtopians competition.

I think Nicole’s ego is officially out of control since winning, but it’s well-deserved. After all, you gotta go gnome or go home.

I like beer.
View all posts by Brian →
This entry was posted in Homebrew. Bookmark the permalink.