For the long Labor Day weekend, Nicole and I decided we would take a camping trip to far Western North Carolina and visit our friends Chris and Cristina Collier, brewers and co-founders of Nantahala Brewing Company in Bryson City. After all, we base all our trips and vacations around beer, so it seemed like a good reason to pay our first visit to the new brewery.

The camping portion of the weekend turned out to be ill-fated, literally. Nicole came down with a cold or some sort of illness on Thursday, but being the trooper that she is, she decided we should try to go camping anyway. However, we started out on Friday later than we planned, so it was getting dark before we could find a legal spot to camp near Bryson City. To top it off, a cold front was moving through, so there were also spurts of rain throughout the evening.

Between the illness, darkness and rain, we decided a motel stay was in order. We ended up at the Ridge Top Motel in Bryson City. I must say that it exceeded expectations for $60 a night. The actual hotel looks much better than the photo on the website. It was not a bad stay and we were able to spend a couple hours drinking Dale’s Pale Ale on the second story porch over the motel office. Disaster averted.

On Saturday we had a delicious breakfast of crepes and locally roasted coffee at Cork & Bean, a wine bar and coffee shop in town. After breakfast we headed out to the brewery, about six blocks away.

The brewery is in an old hangar that the Tennessee Valley Authority built in the early 1940s to store equipment that was used to build the Fontana Dam. Most recently it was an apartment building for hippies.

The outside of the Nantahala Brewery

Nantahala is one of the newest breweries in North Carolina, having just started production in May 2010. However, the idea for the brewery first took shape in June 2008 while Chris and Cristina were on their way back from the National Homebrewers Convention in Cincinnati.

The Colliers traveled from their home in Atlanta to Cincinnati on their motorcycle, and took back roads on the return trip. The night before they finished the home stretch, they stayed the night at the Fryemont Inn in Bryson City. They were having a few beers in the hotel bar when they struck up a conversation with Mike Marsden and a guy named Sarge.

They started talking beer and breweries, and things went in motion. Chris had long thought about starting a brewery, but the brewing climate in his home state of Georgia isn’t very conducive to small craft brewers. Because of restrictive laws, much like in South Carolina, you either need to be a brewpub like Five Seasons, or huge like Terrapin or Sweetwater.

However, North Carolina offered three huge benefits to a small start-up brewery: growler fills, a tasting room and self-distribution. After running the numbers, Chris and Cristina decided to give it a go across the border.

They teamed up with Mike, who also owns Across the Trax, a bar and grill attached to the Nantahala brewery hangar, Joe Rowland, who owns the local Paddlefish outfit, and Ken Smith, owner of Smiley’s in Greenville, South Carolina.

The inside of the brewery is still in the process of being renovated. Team Nantahala has done pretty much all of the work themselves, from installing and refitting the 10-barrel brewhouse they bought from RJ Rockers, running the electrical in the building, putting in a new bathroom, even hanging tarps along the ceiling to insulate the brewery from the metal roof.

Chris Collier with his 10-barrel brewhouse

The goal is to have a tasting room with a bar in the large open front area with the brewhouse and fermenters visible in the back. You can see from the photos that there is a way to go, but it’s going to be a fun atmosphere when it’s done.

All this is even more impressive when you consider that Chris and Cristina still live in Atlanta, and Chris has retained his full-time job. They commute up to Bryson City on the weekends where they work around the clock brewing beer and working on the brewery. It’s been a difficult, but rewarding road to this point. 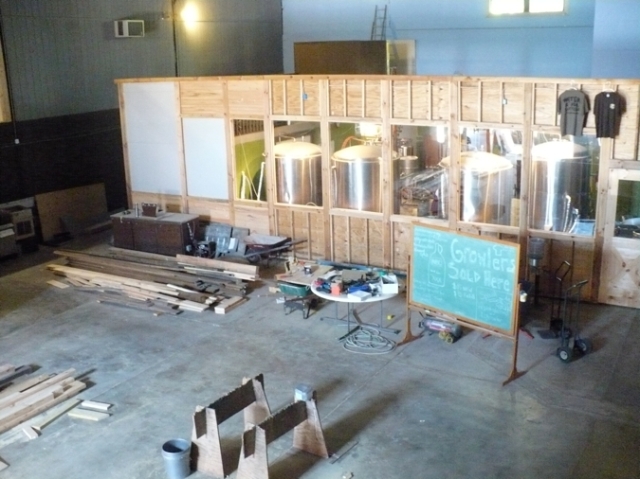 Renovations continue while the brewhouse pumps out beer

All this would be for naught in my eyes if the beer didn’t match the coolness factor of the brewery. Rest assured, the beer is good. The year-round lineup includes Noon Day IPA, Nantahala Pale Ale and Bryson City Brown. Seasonals have included Eddy Out Stout, Nanny Gold and Depot Street Summer Wheat. There is an Octoberfest chillin in the fermenter as I type. I took home growlers of the IPA and the Stout seasonal.

The IPA is a wonderful example of a highly drinkable, yet flavor-packed IPA. It doesn’t hit you over the head and destroy your taste buds on the way down. It has a wonderful aroma of grapefruit citrus, and juicy-fruit flavor. It’s not overly sweet but does have a little bitter hop kick that slaps you about five seconds after swallowing.

It’s difficult in this age of pervasive IPAs to distinguish yourself with this style, but I found this one to be very pleasant, tasty and drinkable. Very good.

The stout is also solid. Jet black with all the roasty, caramel, chocolate you want in a stout. It’s reminiscent of a melted bar of dark chocolate, but it’s not too sweet nor too bitter. It’s medium bodied and flavorful, which make it very drinkable, much like the IPA.

If these two beers are any indication of what’s to come from Nantahala, I’d say that they have a bright future as the frontier beer outpost in Western North Carolina. Hold down the fort!

Brian enjoying the Eddy Out Stout

I like beer.
View all posts by Brian →
This entry was posted in Breweries, Interviews and tagged Bryson City, IPA, Nantahala Brewing Company, North Carolina, stout. Bookmark the permalink.

2 Responses to beer on the frontier: Nantahala Brewing Company