Homebrewers Star at the Charlotte Oktoberfest

Brewtopians beer in transit to Charlotte. Now THAT’S a nanobrewery!

I’ve had the opportunity to pour beer for Thomas Creek and Mother Earth at a beer festival before, and I always tell people it’s much more fun to be behind the bar than the one attending. You’re basically a rock star behind the bar at your table.

I one-upped that this past weekend at the Charlotte Oktoberfest. I was able to pour my own beer at the festival in the homebrew tent with the Upstate Brewtopians. There is no better feeling as a brewer than pouring your beer for a random stranger, having them give you a thumbs-up, or even come back for seconds when there are 200 other beers they could have moved on to.

That is one hot brewing couple. More so on the right side of the photo…

First, I want to give a shout to the awesome people with the Carolina BrewMasters (CBM), the hosting homebrew club. I am in awe of what they were able to pull off logistically. They put on a beer festival with over 6,000 attendees, 85 breweries and 14 homebrew clubs, while raising over $60,000 for charity. I can’t imagine the work that went into this event, and I thank them for inviting the us to be a part of it. My mesh baseball hat goes off to you!

The weekend kicked off with the brewer’s pre-party Friday night at the hotel. Much like a race, it’s important to carb load before a brew festival. The CBM provided a delicious pasta dinner and five kegs of homebrew to go along with growlers from Pisgah Brewing and NoDa Brewing.

The night before a festival is kind of like the night before a wedding. You know how it goes. A bunch of friends that haven’t seen each other in months or years get together, the drinks start flowing, before you know it it’s 1 am, for some reason you started drinking Jack Daniels Single Barrel, and you wake up the next day with a splitting headache and you can’t even enjoy the wedding reception.

I try to avoid that these days. I started off on the slippery slope with a delicious saison made by one of the CBM brewers. Luckily the three chafing dishes of pasta filled me up and gave me a powerful foundation on which to build a weekend.

After hanging out, meeting some new brewers, catching up with old friends, I was about to retire at a reasonable hour. I awoke Saturday morning refreshed and ready to take on the throngs of beer enthusiasts who would be experiencing my beer for the first time that day.

We arrived at the festival grounds around 11 am to set up and get ready for the 1 pm start with the VIP patrons. It rained the night before, so the ground was sloshy and muddy, what I consider perfect conditions for a beer festival. The bonus possibilities now included mud wrestling and drunk people slipping on their asses. How is that not a good thing?

At 1 pm, the first of the 650 VIP ticketed fest-goers came through the gate. To my surprise, the first place many of them came was the homebrew tent. Throughout the day, we got the comment from several people that the most interesting, and often best, beer at the festival was found with the homebrewers. 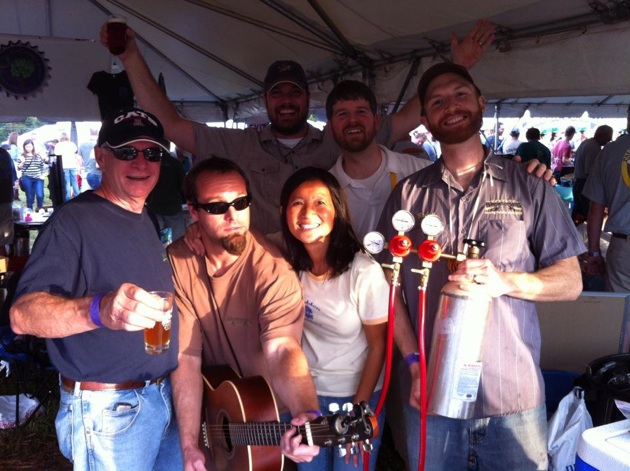 The Brewtopians Crew, minus Nicole who was off wandering in search of a fried bologna sandwich.

That’s a testament to the brewer’s spirit, unencumbered with the shackles of economics. Commercial brewers have to worry about servicing their accounts, lost sales, and that darned supply and demand. Therefore, most commercial breweries don’t bring their best out to festivals unless they are paid for it. (I don’t blame them for that, by the way.)

Homebrewers, on the other hand, give away their beer all the time. Their purpose is to make the best, most interesting stuff that they want to drink and share. What better venue for sharing their handcrafts than a beer festival?

At the Brewtopians table, we had a small, yet stellar lineup of beer offerings for our rookie campaign:

The Metrosexual Chocolate was the star of the show from our table. Obviously, people just wanted to say it, and the chocolate raspberry flavor was a hit with the ladies. True marketing genius, but the beer lived up to the hype. Nicole received several offers from people to buy some of it off her. She should have brought up some bottles!

Bill’s Stiche Alt also received huge praise from the brewer at Olde Mecklenburg Brewery in Charlotte. He came over to visit our table, and told Bill it was a fantastic representation of the style and that he would be doing the world a disservice if he didn’t enter that in their beer competition coming up.

Some of the other memorable brews I had from other clubs were a mint chocolate stout that tasted like a thin mint Girl Scout cookie, a coconut stout (which is very difficult to pull off well) and an amazing double IPA.

It was such an awesome experience, and Nicole and I were already planning ahead to what we want to do next year. It definitely reaffirmed why I brew and why I love the beer community. We’re all united for better beer.

And who could be against that? (Well, except for teetotaling right-wing zealots…)

I like beer.
View all posts by Brian →
This entry was posted in Beer events, Homebrew and tagged beer festival, Charlotte Oktoberfest, Homebrew. Bookmark the permalink.

1 Response to Homebrewers Star at the Charlotte Oktoberfest