Is the craft beer market saturated?

Not from where I’m sitting.

The Brewer’s Association recently released the 2015 craft beer sales data, which showed continued growth of the industry. Craft beer sales increased 12.8% by volume and 16% by dollar, marking the sixth straight year of double-digit growth. Craft beer now holds a 12.3% share of the overall beer market, which is at $105.9 billion in 2015. That’s a LOT of beer. 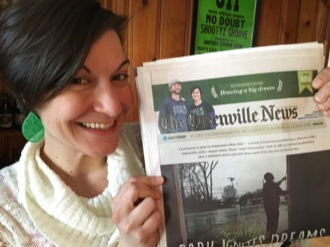 Craft beer may have jumped the shark when Nicole and I make the front page with a brewery that doesn’t exist (yet).

617 breweries opened in the U.S. in 2015, bringing the total up to a record high of 4,225. Craft beer is receiving a ton of coverage in the news media. Hell, even Nicole and I somehow ended up on the front page of the Greenville News, and we technically don’t even exist yet!

With all this attention, and a new brewery seemingly opening up on every corner, it has many wondering if, or when, the craft beer bubble will burst.

In our journey to open Fireforge, we’ve had many prospective investors express concern over the number of breweries opening, along with limited shelf space in stores and taps in bars, and passed on us. I’ve lost track of the number of banks that told us they have financed enough breweries and their “portfolio is full in that industry.”

How many more craft breweries can the market support? Can craft beer continue to carve into Big Beer’s market share at a double-digit growth rate?  These are billion dollar questions that no one has an answer for.

Perspective from the grassroots

What I can share is our experience as a start-up brewery in Greenville, SC. Everywhere we go and every event we attend, people practically beg us to open in their town. There aren’t enough new breweries to go around. Mauldin, Simpsonville, Greer, Fountain Inn, Pickens, Spartanburg, Easley, Clemson… People are thirsty, and they want a neighborhood brewery that they can call their own.

To put that in perspective, the Asheville area has over 20 operating breweries, with who knows how many in planning. Granted, Asheville has it’s own unique culture, very different from Greenville. However, they have roughly the same population. Greenville’s metropolitan area has 400,000 people and Asheville is at 420,000.

The closest beer market in South Carolina is Charleston, which has around 15 breweries and 15 or more in planning. Greenville, and the Upstate in particular, is far behind other areas in the region.

Every pro brewer I talk to tells me to go as big as possible. Expect to hit capacity early and be prepared to work your ass off to keep up with demand. And what we are seeing backs that up. Thomas Creek has added capacity in the past couple years. In Asheville, Burial, High Wire, Wicked Weed, Highland, and Green Man have recently added additional locations or made huge capacity expansions.

We have our work cut out for us

Obviously, by starting Fireforge, we’re betting the farm that there is still a lot of room for growth in craft beer. There is a tremendous amount of competition on a local, regional and national level. There is a finite amount of shelf space and taps in stores, bars and restaurants.

On the positive side, the biggest competitive advantage of local craft beer still holds true. Your local brewery can offer the freshest beer, the most variety and contributes directly back into your community. That will never change.

What we’re seeing in the more mature craft beer markets like Portland, Denver and San Diego is a return to the neighborhood brewery and tap room.  We’ll eventually see that happen as well in the South.

We know we’re going to have to work hard to brew great beer and provide an amazing experience for our guests. We know the shakedown is coming down the road. Only the best will thrive, or even survive, based on the merit of their products and service. As it should be.

And we look forward to earning our place in the craft beer world and growing the pie for everyone.

I forgot to include Upstate Craft Beer and Shoeless Brewing in my original post listing current Greenville breweries. That was completely unintentional and has since been updated. Thanks, James, for bringing that to my attention!

I like beer.
View all posts by Brian →
This entry was posted in Beer-related news, Business. Bookmark the permalink.