This past week could have been classified as Greenville’s Unofficial Beer Week. It was anchored by Saturday’s Top of the Hops Festival, Greenville’s first major beer festival. Barley’s Tap Room and Thomas Creek Brewery, Greenville’s craft beer standard bearers, were the presenting sponsors, and they did not take that responsibility lightly. They picked it up and combined to throw one hell of a week-long party.

Let’s take a sentimental journey, though I will admit after four days of going out (I took Wednesday off for my own personal safety) the journey is slightly hazy.

Tuesday: The Gubna Comes To Town

On Tuesday night, Adam Mundy from Oskar Blues was on hand at Barley’s to unleash the Gubna Imperial IPA on our town. Not only did Adam bring Gubna thunda’ on draft, he also had it on cask.

The Gubna is a single-hopped Imperial IPA, using only summit hops. I’ve never used summit in my own homebrew recipes, so I wasn’t sure what to expect. Let’s just say it was strongly reminiscent of a friendly herb. A kind bud, if you will. I’m sure that choice was not accidental.

I started off with the cask selection, which was aromatic, smooth and delicious. However, the finished product on draft was even more so. It was awesome. The aroma came up and punched me in the nose. The carbonation bubbles proceeded to make the beer dance on my tongue. I believe it was doing the tango.

As I mentioned earlier, I was MIA on Wednesday for my own personal well-being. Knowing what lie in store Thursday, Friday and Saturday, I felt I needed to choose my battles, and it’s nothing against Foothills, but I needed to rest.

However, looking at the lineup of beer Foothills brought to Barley’s that night, I’m having more regrets than when I decided not to go see Stone Temple Pilots on the Purple tour in 1995. Sexual Chocolate, Vanilla Bean Barrel-Aged Peoples’ Porter, and a honey-primed firkin of Cascade, Centennial, and Simcoe dry-hopped Hoppyum IPA.

Excuse me while I grab a tissue. The tears are starting to well up.

Thursday: Up the Creek, I would like you to meet Randall

Thomas Creek joined the fray at Barley’s on Thursday night, and they brought out the big guns. And I mean big. Up the Creek is a 12.5% ABV extreme IPA. Run that sommbitch through a Randall of fresh hops and holy crap.

It’s such a big beer at 12.5% with a ton of body and a bajillion IBUs that when you add that fresh hop aroma and flavor from the Randall it takes it to another plane of being. Thomas Creek also brought out the Randall at the World Beer Fest in Columbia and Brewvival Festival in Charleston, and it was regarded as a top 5 beer by many of the people I talked to. I’m not crazy and it ain’t no joke.

Friday: Beer and BBQ at the Brewer’s Reception

The scene shifted to Thomas Creek’s brewery on Friday, as they hosted the pre-festival brewer’s reception. Known for their Southern hospitality, Thomas Creek knows how to throw a party. Then again, a brewery full of beer, homemade barbecue, and live music is a guaranteed recipe for success.

Aside from being a veteran brewmaster, Tom Davis is apparently a barbecue savant as well. He was out at the brewery at 7 am to start smoking a mountain of pork butts. I’m not sure what he did to make that pork so succulent, but it’s probably illegal.

What should be illegal is his homemade hot sauce. I thought the warning on the label of the “Devil’s Pecker” bottle was just hype, and I paid dearly. I paid most of the bill the next day, but believe me, it has been paid in full.

The highlight of the dinner for me, though, were the brats. They were boiled in Deep Water Dopplebock before being thrown on the grill. They may have been the best brats I’ve ever had. No more pre-boil in PBR, I’ve found my new secret to success.

Saturday: Top of the Hops

After a whirlwind week of events and beer, it finally came down to showtime. Top of the Hops is the first major beer festival to spring up in Greenville. Since I’d like to see more cool beer events here, I had my fingers crossed that my fellow Greenvillians would turn out en masse to support this festival. I believe they came through. 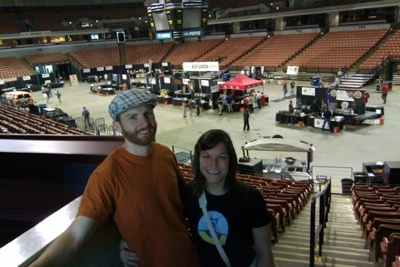 The event was primarily indoors at the Bi-Lo Center, a 16,000 seat venue in downtown Greenville. Indoor beer festivals always make me nervous that they’ll feel like a trade show. However, Top of the Hops kept the cement floor, had plenty of floor space, and had cornhole and ping pong that kept it from feeling too sterile.

At the festival I presented the Homebrewing 101 session at Brew University, and I have to admit I was a little nervous going in. While I’m no expert homebrewer, I know enough to fool beginners, so I knew I’d be ok. However, it was more challenging than I thought it would be to present three years of knowledge in 20 minutes, all the while under the pressure of knowing all these people had lots of beer left to drink. 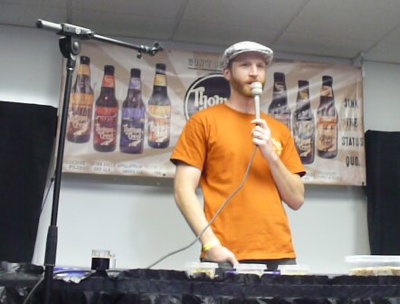 Luckily, I had beer to share at the end: a Belgian Golden Strong Ale that Nicole and I brewed, along with Katie Barnes’ (from Thomas Creek) first-ever homebrew, a chocolate stout. (I will readily admit, her first brew was much better than my first red ale.)

Everyone told me I did a good job, but you can never trust your friends. I did have a few people come up to me afterward to chat, and I even had several people from my seminar pull me aside throughout the rest of the festival to ask questions, so I must not have been that much of a bumbling idiot.

The second seminar was given by Tom Davis, brewmaster from Thomas Creek, on the craft beer industry. Tom’s talk was insightful, and I especially enjoyed his answer to how Thomas Creek has evolved over the past 12 years of operations, from starting out as “essentially a large homebrewing operation” to a brewery that measures and accounts for everything, including oxygen levels in their bottles, a consistent temperature throughout the mash, and invaluable knowledge and experience in yeast wrangling. All those factors have allowed Thomas Creek to produce a better, more consistent product. I couldn’t agree more.

John Bice from Whole Foods hit clean-up at the Brew University with a food and beer pairing. Not only was his knowledge of food and beer impressive, he was amazingly articulate at the three-hour mark of a beer festival. I found out his secret: coffee. I knew he had to be cheating.

His pairings were delicious: 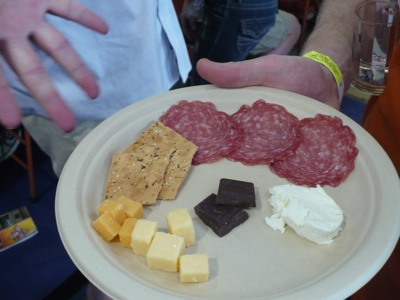 The rest of the festival was well-done. Logistically, there was plenty of space, good traffic flow, plenty of water, and obviously lots of bathrooms. The only critique was that a few of the vendors were separated outside, which was both good and bad. Bad that they were separate and it was crowded out there on a nice April day, but good that there was at least an outdoor option for those that wanted to see sunshine. 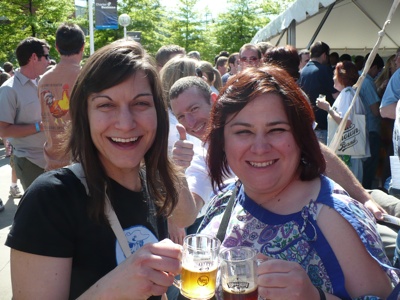 I didn’t go back down to the floor once I presented my seminar at 3:00. I wanted to catch the other presentations on the upper level, and I had been blessed with access to the VIP lounge, so I was able to find some rare and interesting beers in there. The most interesting was Billy’s Chilies from Twisted Pines. It had a nice chili aroma and balanced flavor with a little spicy kick at the end. Chili beers are hard to do, but I thought this one pulled it off.

To wrap up my review of the festival, I have to tell one final story. I feel this one about sums it up.

It’s about 6:00, and Nicole, myself, and our friend Adam are standing near the little alcove that served as the location of the Brew University. I go behind the podium to grab my cooler, and I see three Thomas Creek buckets are still there with a good number of beers left in each.

There was a couple sitting in the chairs toward the back, and something possessed me to let the guy know he could come grab a beer or two. (You know, trying to spread the love.)

So they come up to the stage to browse the wares, and I head back to the concourse with my cooler. We notice the guy has started stuffing beer bottles into his cargo shorts. Nicole goes to take a picture of them and then comes back. About a minute later, we notice the two of them walk out of the University and down the concourse carrying one of the Thomas Creek tubs. After I snapped out of my disbelief at what I was witnessing, I ran down to let the guy know I didn’t mean he could take all the beer and a tub.

I kid you not, his response was, “Oh, you mean I can’t have the tub? Well, I’ll give you $10 for it.” After informing him it was not mine to sell, he and his girlfriend decided to peacefully return it to the stage, where I noticed they had taken all the beer in the other two coolers and piled it into the one they tried to walk off with, probably 50 beers in all. Oh, and he did manage to snag one bottle for the road.

Saturday Night: The Cherry on Top of the Hops

After all that, there was still more beer deliciousness to be had. Barley’s offered four casks at their post-festival party:

You might wonder how I’m still alive after a beer festival and these casks. Somehow, moderation ruled the day and Nicole and I split a flight of the cask beers.

The oak-aged Hop Art was delicious and right on, much better than my feeble attempt at a homebrewed oak-aged IPA last summer. Terrapin’s brown ale on pinot noir was a lot tastier than I expected. It had an intriguing spice flavor, reminiscent of cocoa and clove.

(I’m sure the Highland cask was good, but I had it third after the Terrapin and Coast, and it was underwhelming. I’m sure it was a fine beer, but it just didn’t hold up after the first two.)

The Thomas Creek Dopplebock cask was like drinking dark chocolate cake with vanilla icing. It was close to sending me into a diabetic shock, but it was worth it. Dessert in a glass.

It was the perfect way to end a great week of beer in Greenville. I hope this opens the flood gates and we have many more like it. Not that my body could handle it.

I like beer.
View all posts by Brian →
This entry was posted in Beer events. Bookmark the permalink.