Bringing BottleTree to the World

Last Monday I had the privilege of being a part of bringing a new beer into the world. It was the first bottling run for the pilot batch of BottleTree Blonde. BottleTree, based out of Tryon, NC, is the culmination of the dream of engineer turned homebrewer turned commercial beer maker, Fred Block.

The pilot beer is a belgian-style blonde ale which I think it’s going to make a big splash once it hits the market. It’s crystal-clear golden yellow with a light body, slight sweetness and a dry finish. It also has a perceptibly tart twist at the end.

Fred’s aim with this beer was to make it a refreshing, accessible gateway beer for people who typically don’t drink craft beer, but with enough complexity that will satisfy the beer geek. However, this isn’t a “light” beer in the traditional sense. It’s 6% ABV, but you’d never know it by how light and crisp it is.

I give it my stamp of approval. I think it would make an excellent summer session beer. 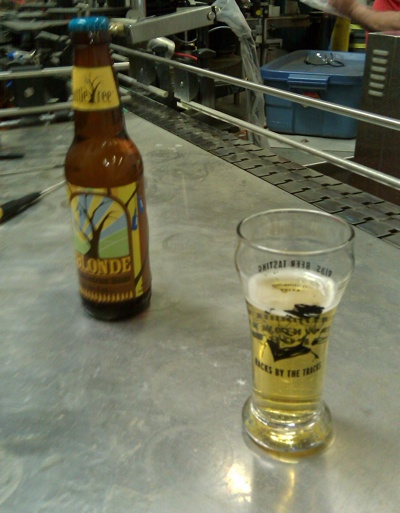 The Dream of BottleTree

Fred’s story in creating BottleTree is one of those down-home, American business stories that ought to inspire any aspiring homebrewer or entrepreneur.

Around 8 years ago, Fred discovered homebrewing while researching thermodynamics for his professional engineering exam. He found some info on the thermodynamic aspects of brewing and was instantly hooked on the process. He started reading everything he could find on brewing for more than four hours a day after work nearly every day.

Being an engineer, he started building process maps, high level at first, then drilling down and expanding each piece into more and more detail. And believe me, I’ve seen his homebrew system, he’s done his homework.

Almost immediately, Fred knew he wanted to go commercial. He started planning and after more than 600 hours of research over eight years, he finally caught the break he was looking for.

Fred happened to run into Tom and Bill Davis, the owners of Thomas Creek in Greenville, SC, at an Octoberfest celebration in the fall of 2009. After telling the Davis’s his plans for BottleTree, they were interested in working with him to brew the beer. Seven months later the pilot batch rolled off the bottling line.

Now, don’t let my terse description give the impression it’s been an easy process. Fred has had to deal with a lot of rejection and doubters along the way.

Rejected by banks, Fred has risked his personal life savings to make this happen. Rejected by other breweries, he had no idea how his beer would be brewed until his chance meeting with Thomas Creek. It sounds cliche, but through it all he never doubted himself and never gave up on his dream.

Fred has sent most of the 32-case pilot batch out to 18 distributors in seven Southeastern states looking to see who wants a piece of the action. Early signs look good, as distributors who have heard about what Fred is doing have actually been calling him, which is remarkable for a start-up venture.

Fred describes BottleTree’s philosophy as creating unique beers that most people would enjoy. Once the Blonde kicks in the doors, Fred said his next style will likely be an American Pale with fresh ginger root. That was his first award winning homebrew, and it’s only appropriate that it be the next beer in the BottleTree lineup.

There’s a long road ahead, but I want to congratulate Fred on achieving this milestone. I hope he’s able to take a moment to pause and soak it all in. It’s one hell of an accomplishment to get to this point, and I’m looking forward to buying my first six-pack.

I like beer.
View all posts by Brian →
This entry was posted in Breweries. Bookmark the permalink.

3 Responses to Bringing BottleTree to the World