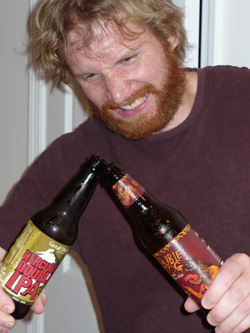 Being from South Carolina, I don’t really know if there is a heated rivalry between Denver’s own Flying Dog and Great Divide. Just for fun, let’s pretend there is. To fan the flames across the nation, I wanted to do a head-to-head comparison between Flying Dog’s Double Dog Double IPA and Great Divide’s Hercules Double IPA.

Let’s start with the tale of the tape. Double Dog measures in at a beefy 11.5% alcohol by volume, while Hercules comes in at 9.1%. Both brews claim 85 IBUs (International Bitterness Units). These stats capture the essence of the difference between the two beers. Both beers are crazy hoppy, but higher alcohol content of the Double Dog gives it a slightly maltier, and sweeter, character. (Perhaps in my next post, I’ll explain why a higher alcohol percentage can give a beer a sweeter flavor.) I feel that the maltier character of the Double Dog gives it a more balanced flavor, while Hercules accentuates the hop character more.

The difference is not only shown in the flavor, but also the aroma and color. The Double Dog is slightly darker than Hercules, and the aroma of Hercules is more floral (hoppy), while Double Dog has a sweeter smell. 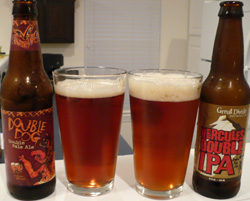 Both beers are really good and very similar in many respects. I’m a hop-head, so I definitely enjoy the Hercules and I think it is an excellent beer. The floral aroma and lingering hop bitterness is a joy to my senses. However, if I were to pick a winner, I would choose the Double Dog. It is extremely intense, yet very well balanced. It has so much going on that it can satisfy hop-heads, yet brings enough malt to tone down the lingering bitterness of the hops. You can’t go wrong with either beer, and it ends up being a matter of personal preference. Both are excellent, but not for the faint of heart. They will knock you on your ass and won’t apologize for it.

I like beer.
View all posts by Brian →
This entry was posted in Beer. Bookmark the permalink.