An Epic Meal of Simplicity: Meat, Cheese and Beer 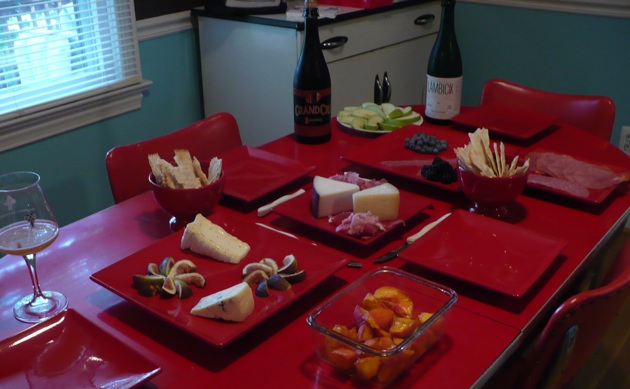 Wine and cheese is so 20th Century.

Beer and cheese is a vastly underrated pairing. Wine is the classic choice to pair with cheese, but beer may actually be a better match. The carbonation in beer in effect washes the fat and oils of the cheese off your tongue, keeping your palate fresher.

For those that don’t care about fresh palates, beer is extremely versatile and it’s relatively simple to find great pairings. From light lagers to spritzy Belgians, malty ambers, toasty porters and funky sours, it’s very accessible to figure out what will go well with a spread of meats and cheeses.

A couple weeks ago, I bought a bottle of LambickX from the Community Tap. A three-year old lambic isn’t exactly a beer you crack open on the boat (or at least I don’t), you’ve got to step it up. What better inspiration to drink some funky beer with funky cheese?

I bought a spread of four cheeses from Whole Foods to accompany the beer: drunken goat, Rogue Oregonzola, truffle brie and idiazabal (an aged sheeps cheese).

If we’re having cheese and beer, you gotta have some meat. Prosciutto, hot cappicolo and hard salami would do nicely.

With all that salt and savor, sweet was needed to balance. In came the freshly picked blueberries and blackberries, figs, granny smith apples and South Carolina peaches. You know, just because we could.

Once the table was set with 87,178,291,200 possible flavor combinations, we popped open the bottle of LambickX and began the feast.

The lambic was as advertised. Horse blanket, wet hay and grass on the nose. The barnyard wasn’t as prevalent in the flavor. It started out like a sweet tart and finished with a bitter twist. It was crisp and light. It had everything you could ask for to pair with funky cheese and cured meats.

Our guests, Madeline and Jason, brought with them a bottle of Rodenbach Grand Cru, which was a welcome addition to keep the sour going after the LambickX was through. The Grand Cru was sweeter and maltier than the lambic without the barn. It was a nice step up to match the building intensity of the cheese.

My favorite combination was the Oregonzola with a fig and prosciutto, chased by the LambickX. It was a perfect swirl of funky awesomeness, and beer took it to a heavenly place.

We finished the evening with New Belgium Clutch, a dark sour ale, to go along with a chili dark chocolate bar.

What was an epic feast. It goes to show that if you slow down, give it some thought and choose items with real flavor, you can do some amazing things with very little effort. All it takes is a little imagination.

I like beer.
View all posts by Brian →
This entry was posted in Beer, Beer & Food. Bookmark the permalink.

1 Response to An Epic Meal of Simplicity: Meat, Cheese and Beer