2012 Samuel Adams Utopias on display upon our arrival.

In 2009, BrewDog (Scotland) threw down the gauntlet to brew the highest ABV beer on the planet.  They launched the Tactical Nuclear Penguin (32% ABV) to beat out the reigning champion at the time, Sam Adams Utopias (27% ABV).

I won’t get into the ABV arms race that ensued between BrewDog and Schorschbrau, or  the moral debate over whether these “freeze distilled” malt beverages should be even be considered beer. (There is a style of beer called eisbock, so perhaps these are just uber-imperial eisbocks. I’ll let you decide.)

I was privileged enough to come into possession of a bottle of Tactical Nuclear Penguin a couple years ago, and I had been waiting for the right time to open it. When is there ever a “right time” for a 32% beer? (Then again, is there ever not a right time?)

The circumstance was made clear when my friend Jake Grove at the Anderson Independent told me that a bottle of the 2012 Utopias made its way to his house.

It was time for a Utopias vs. Penguin showdown: 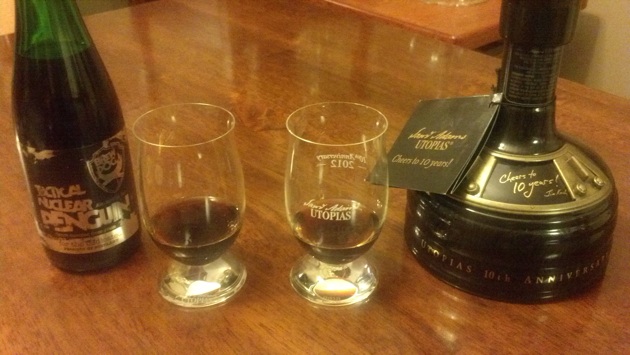 Tactical Nuclear Penguin vs. Utopias, to the pain.

First up was the Penguin. The alcohol vapors hit my nose before I was even six inches from the taster. It was hard to get past the massive amount of rubbing alcohol in the aroma to smell anything else.

The first thing I noticed when I tasted it was burnt rubber. Then burnt sugar, like when you char a marshmallow over a campfire.

So by now you’re thinking, “Damn, that must be terrible.” I’m not sure it is so terrible, it just isn’t that appetizing. I’ll continue.

Once you get acclimated, or numb, to the heat of the Penguin, other characteristics do start to come out. The beer was aged in scotch barrels, and that lent an earthy, peaty flavor to the beer.

Other than the burnt sugar, alcohol and peat, the malt character lacked complexity. It just sort of smacked me over the head and asked how its ass taste.

The beer was also slightly carbonated, which the Utopias was not, so that may have also contributed to the sensation of heat and prickliness that the beer gave off.

If you enjoy scotch, which I’m still trying to acquire a taste for, I think you might enjoy this beer. And since it was brewed by Scots, I’ll give them credit for that. I think it’s an extremely difficult beer to enjoy, though it makes me wonder if, like scotch, it needs to be aged for 12 years instead of 3.

While the Tactical Nuclear Penguin descended with the grace of a nuclear bomb, Utopias entered the scene with the refinement of the Most Interesting Man in the World, adorned with a beautiful woman in a small black dress on his right arm. 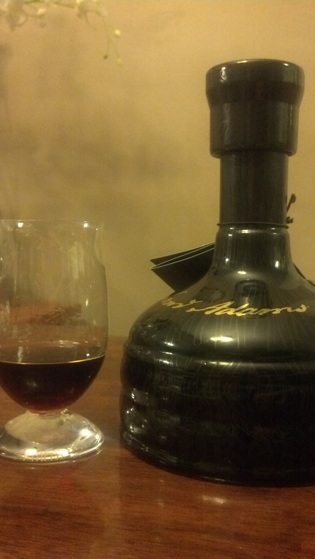 Despite being 29% ABV, only three points lower than the Penguin, there was not nearly the boozy nose.

The slight amount of alcohol on the nose left room on the aroma for sweet malt, maraschino cherries and marshmallows.

The flavor had a layering effect, first with toffee and dark chocolate. It finished with a hazelnut and caramel character that reminded me of Frangelico.

The body of the Utopias was viscous and warming. It’s not conditioned, so it comes across as port or brandy.

As you can tell if you read the back-story, there’s a lot that goes into this beer and it shows. It’s extremely complex and layered. I feel like I’d need to go through at least half the bottle to experience everything it had to offer. And then I would be passed out in a ditch.

The winner, by unanimous decision, Samuel Adams Utopias! I feel like the Tactical Nuclear Penguin has potential, but it still needs a good decade or two to develop. If you have a bottle and the patience to wait a while, I would encourage you to do so.

What’s amazing is that Utopias is so smooth for being so young. The cool thing is, it will get better with age.

So how long would you wait to open these?

I like beer.
View all posts by Brian →
This entry was posted in Beer and tagged BrewDog, Sam Adams, Tactical Nuclear Penguin, Utopias. Bookmark the permalink.